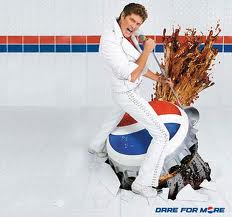 I’ve had a little too much tea this evening and feel extremely excitable before bed, so I thought I’d blog about a memory which makes me giggle whenever I think of it. It’s a quick one.
About six years ago I was on a United Airlines long-haul flight from L.A to Sydney. For those of you fortunate enough to never to have flown with United, its mediocre service earned it the reputation of being the cattle train of the skies.  I always associate it with big haired, fifty-something female flight attendants with mid-western accents and lined faces languidly enquiring, “Somethinna drink?” while pushing enormous carts of sugary spoil up and down the  aisle.
During this particular flight, in the dead of the night when all the lights were dimmed and seats tilted back, I opted to watch movie after movie and consume sugar until I shook. The economy cabin was completely silent  and the majority of passengers were asleep. Perhaps I was bored or simply finding myself drowsy, but in the silent, semi-darkness I decided I wanted another Pepsi.  I silently climbed over the snoring passenger on my right and landed in the aisle. I made my way to where the snacks and beverages had been left out and retrieved a Pepsi. I then tip-toed back to my row, carefully climbed over the sleeping passenger and dropped into my seat.
Actually, it didn’t go that smoothly. Around about the time when I dropped back into my seat, I also dropped the unopened can of Pepsi.
I still can’t believe this happened.
The can hit a metal bolt on the base of my chair and was pierced. It then made a hissing, spluttering noise and started spinning wildly under my seat.  A strong jet of Pepsi burst out from the hole like a fountain, and as the can madly spun in circles it soaked the feet and socks of every passenger within a 3 meter radius of my chair. It went on for about 20 seconds. It was as though someone had let a high-pressure hose filled with cold, sticky soft drink unattended. People started to wake up and register confusion when they realised their socks were covered in Pepsi. Some used precious blankets to wipe the stickiness from their feet, and then remained cold for the rest of the flight. Others slumbered on, unwittingly saving the surprise for later and letting the stickiness really sink in.  As if on cue, the the cabin temperature seemed to get a little colder, and made everything that  shade more uncomfortable.
I remained inconspicuous during the entire saga, sitting low in my seat and even gently shutting my eyes when the indignant questions began. After a respectful pause (of about an hour) I silently crept over the passenger next to me and retrieved another Pepsi.
So that’s the story of how nothing could keep me from Pepsi during a long-haul flight.